Sen. Tim Scott lambasted President Biden on Saturday in a video claiming the president’s increasingly hostile language against his political opponents is a sign of weakness in leadership.,

Sen. Tim Scott lambasted President Biden on Saturday in a video claiming the president’s increasingly hostile language against his political opponents is a sign of weakness in leadership.

“On Tuesday, President Biden talked about a really important issue,” Scott opened. “It’s the issue of voting rights for all Americans, but specifically for minority Americans. As a guy who grew up in the south, this issue is really important to me.”

DESANTIS RIPS BIDEN AS ‘BRANDON IN THE WHITE HOUSE,’ SAYS ‘HE’S NOT HAD A VERY GOOD YEAR’

“It’s one of the reasons why I was so infuriated by the comments of the president, likening where we are today to somehow returning to the Jim Crow era,” Scott said in the video.

Biden warned of a stark dichotomy between the proponents and opponents of the Democrats’ election law overhaul bill dubbed the “John Lewis Voting Rights Act,” asking a crowd in Atlanta on Tuesday whether they were on the side of reviled figures like segregationist Gov. George Wallace and Confederate President Jefferson Davis, or on the side of civil rights leaders Martin Luther King Jr. and the late John Lewis.

“He didn’t just refer to Republicans as racists and traitors. He even included members of his own party who disagree with him,” Scott said of Biden’s racism allegations, alluding to Democratic Sens. Joe Manchin and Kyrsten Sinema who have come out against reforming the 60-vote threshold filibuster rule in the Senate.

“I can’t think of a better example of failed leadership than the speech I heard on Tuesday. It wounded my heart because I have watched America struggle with our original sin for my entire life,” Scott said in the Saturday video.

During Friday’s press briefing, Fox News’ Peter Doocy asked Psaki about Biden’s inflammatory remarks made in Atlanta attacking those who didn’t support the passing of the legislation seen by conservatives a complete liberal overhaul of how elections are conducted nationwide.

“Talk about a year ago and working with Republicans, now he is talking about Republicans that don’t agree with voting rights – he’s describing them as George Wallace, Bull Connor and Jefferson Davis,” Doocy said. “What happened to the guy who when he was elected said, ‘To make progress, we must stop treating our opponents as our enemy?'” 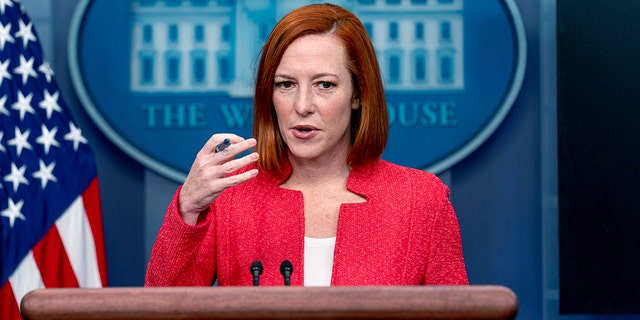 “I think everybody listening to that speech who’s speaking on the level, as my mother would say, would note that he was not comparing them as humans,” Psaki responded. “He was comparing the choice to those figures in history and where they’re going to position themselves as they determine whether they’re going to support the fundamental right to vote or not.”

Fox News’ Yael Halon and Joseph A. Wulfsohn contributed to this report.