An outside investigation into the Aug. 12 domestic violence incident between Gabby Petito and Brian Laundrie in Moab, Utah, found “unintentional mistakes” – and issued a number of recommendations on how the department should move forward.,

FIRST ON FOX: An outside investigation into the Aug. 12 domestic violence incident between Gabby Petito and Brian Laundrie in Moab, Utah, found “unintentional mistakes” – and issued a number of recommendations on how the department should move forward.

The domestic violence call, first reported by Fox News Digital, included allegations that Laundrie slapped and hit Petito, but both of them denied that version of events to responding officers. Police ultimately split them up for the night and let them go.

“I am confident and comfortable in stating the mistakes that were made were not made intentionally,” Price Police Capt. Brandon Ratcliffe wrote in the highly anticipated report on his months-long investigation into Moab police’s handling of the call.

The Moab Police Department drew scrutiny after a pair of bodycam videos emerged showing its response to the Petito-Laundrie dispute, in which police made no arrests or citations despite a Utah statute requiring one to be issued in response to domestic violence incidents. After interviewing both Petito and Laundrie, as well as another witness, officers ruled out domestic violence and deemed the incident a “mental health break.”

Petito appeared visibly shaken throughout the entire encounter and told officers Laundrie had grabbed her face while gesturing toward her neck. But the officers appeared to rule her the aggressor – and they seemed reluctant to arrest the diminutive, distressed woman at the time. But they also didn’t appear to even view Laundrie as a potential suspect despite the 911 caller alleging he was an aggressor.

“Brian didn’t get away with anything for being cute, and Brian showed more red flags than a Chinese Communist rally going on that he was a s—– boyfriend,” Pratt told Ratcliffe, according to the report. But, he added, “I couldn’t charge him. The fingernail thing, the way it was described by [redacted] and Gabby, even if I didn’t clarify it with him, that’s not something I can arrest him for.”

So they told the couple to split up for the night, leaving Petito with their converted camper van and driving Laundrie to a motel – where management later told Fox News Digital they could not confirm he actually stayed last night.

But Ratcliffe took issue with that decision and recommended placing both Moab officers involved, Eric Pratt and Daniel Robbins, on probation.

He also aggressively questioned them about what authority he had to split them up if he didn’t have evidence of a domestic assault. Robbins said he couldn’t answer and Pratt admitted they couldn’t split the two up. But the couple didn’t object.

Roughly two weeks after the Moab incident, Petito’s family last heard from her. The FBI later found her remains at a Wyoming campsite she’d shared with Laundrie. He’d driven home to his parents’ house on the other side of the country without her and said nothing to investigators, Petito’s family or the public before going on the lam and eventually turning up dead himself in a suspected suicide. He was the only person of interest in her death.

A Moab city spokesperson said that officials planned to implement the report’s recommendations and will also add a domestic violence specialist “to oversee incident investigated by Moab officers.”

Attorneys for the Petito and Laundrie families did not immediately respond to requests for comment.

“He was slapping her,” the dispatcher asked.

“Yes, and then we stopped,” the caller, whose name was redacted in the recording, said. “They ran up and down the sidewalk. He proceeded to hit her, hopped in the car and they drove off.”

He suggested Officer Robbins, who was undergoing field training alongside Pratt at the time of the call, should have his training reviewed and possibly undergo additional time.

Officer Pratt told the investigator he did not activate his bodycam while interviewing the witness outside the Moonflower Co-op, where witnesses reported the initial altercation between Petito and Laundrie. 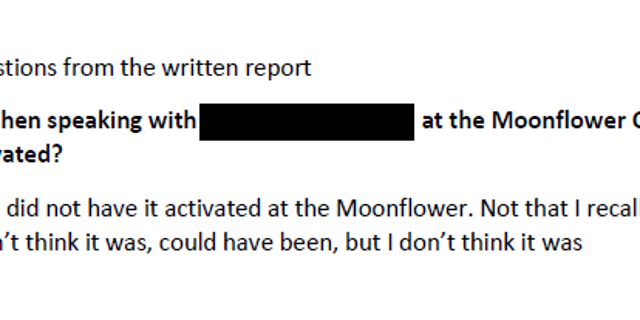 A portion of Ratcliffe’s interview with Pratt. (City of Moab)

Happy Morgan, a local defense attorney, said that was not allowed and shared a portion of the state’s policy on bodycams, which says that cameras should be activated for “a field investigation or interview.”

“They are supposed to reach up and tap that camera on when he was dispatched,” she said. 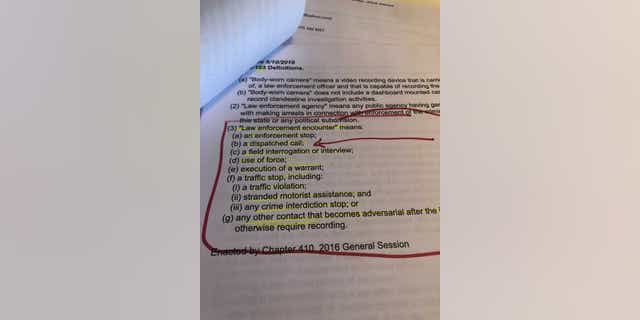 In his interviews with Pratt, Ratcliffe said the officer told him he was “devastated” about what ultimately happened between Petito and Laundrie.

But when Ratcliffe pressed the officer on why he didn’t follow up on Petito’s claim that Laundrie had hit her grabbed her face.

“Officer Pratt stated that he really thought there had been,” the report reads.

Ratcliffe recommended “at least eight hours” of both report writing and domestic violence investigation training for the officers, in addition to legal training “to ensure officers understand Utah State Laws and Statutes.”

“I would suggest building a stronger relationship with your local prosecutors to where if there are legal questions that officers are unable to answer, that they are able to and feel comfortable with, reaching out for additional guidance,” Ratcliffe wrote.

He called for a review of the department’s report approval processes. And he said the department should implement a policy requiring photographs to be taken of all injuries, regardless if the subject is a suspect or victim.