Michelle Goldberg responded to critics accusing her of stretching her neck for the American Federation of Teachers president.,

New York Times columnist Michelle Goldberg was on the defensive for her constant shielding for American Federation of Teachers president Randi Weingarten, presenting her as a champion for the normalization of schools during the coronavirus pandemic.

“I argued that while many people blamed her for school closures, she’d actually labored to keep schools open,” Goldberg began her piece Monday while referring to a column she had written in December. “A common criticism of the article was that Weingarten was just trying, with my help, to salvage her reputation as evidence of the harms of interrupted schooling mounted.”

Goldberg cited a tweet from Sen. Tom Cotton, R-Ark., who mocked Weingarten’s “rehabilitation tour” as well as a Fox News story about the backlash her December column initially titled “Can This Woman Save American Public Education?” and a tweet swiping the article for having “aged beautifully” amid the Chicago Teachers Union forcing schools in the Windy City to close for several days amid the Omicron wave.

“Maybe I’m just defensive, but I think it’s aged OK,” Goldberg reacted. “It seems clear to me, as I’ve watched how public schools are responding to Omicron, that Weingarten, along with some other union leaders, is trying to avoid shutdowns, even at the risk of infuriating some union members. The vast majority of the country’s schools, after all, are open, even though there’s probably a better case for shutting down now than there has been at any point since the spring of 2020. Where schools have closed, it’s mostly been for logistical reasons — there are simply too many staffers out sick.” 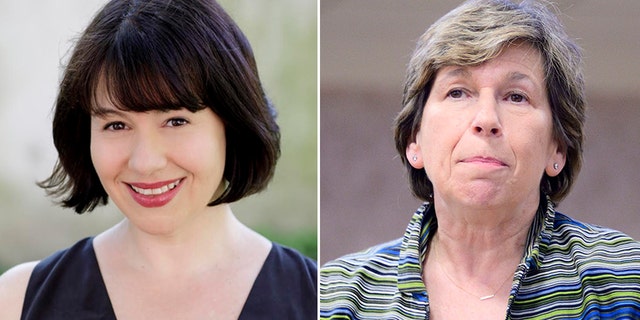 Weingarten insisted to Goldberg that Chicago “is an anomaly” as the vast majority of public schools across the country are open.

Goldberg questioned why Weingarten has not demanded remote teaching as AFT members would “overwhelmingly” to go remote for a few days during the COVID surge, to which the union boss replied, “Kids, our society, our communities need very much to do whatever we can to create normalcy,” adding, “‘Whether it’s kids learning, whether it’s isolation issues, whether it’s the economy,’ too much depends on functioning schools.”

“Assume for a second there was not this toxic environment,” Weingarten said. “I think what you’d actually see is a lot of people feeling pretty good that schools are being opened, and that the communities are coming together to do what we used to say we should do, which is: schools should be first priority.”

Goldberg wrapped up the article writing, “This is the hardest situation that she’s ever faced as a union leader, Weingarten told me. Lots of teachers are frightened and exhausted. The story, for now, is that most of those who can are still showing up.” 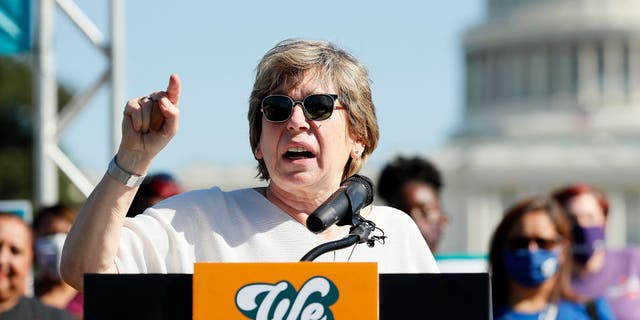 WASHINGTON, DC – OCTOBER 21: Randi Weingarten, president of the American Federation of Teachers, along with members of Congress, parents and caregiving advocates hold a press conference supporting Build Back Better investments in home care, childcare, paid leave and expanded CTC payments in front of the U.S. Capitol Building on October 21, 2021 in Washington, DC. (Photo by Paul Morigi/Getty Images for MomsRising Together)

Goldberg went to bat for Weingarten in a piece published in November titled, “Democrats Desperately Need Schools to Get Back to Normal,” writing how the union boss “wants to see outdoor masking ended as a first step toward unwinding other Covid restrictions.”

“The C.D.C. has been clear that everyone can unmask outside unless they’re in close contact with each other,” Weingarten told Goldberg at the time. “And I believe that schools should be doing this for recess. And I believe we need to give parents and teachers a road map to what it takes to start undoing the mitigations. It was clear that vaccines for teachers helped us reopen schools. Maybe it’s vaccines for kids helping us get to unmasking of teachers and kids in schools.”

But then in December, Goldberg wrote a column portraying Weingarten as an anti-lockdown champion for parents who want their kids in schools as critics blamed her for the closures.

“[T]hose who fault Weingarten for closed schools misunderstand the role she’s played over the past 20 months,” Goldberg wrote. “Rather than championing shutdowns, she’s spent much of her energy, both in public and behind the scenes, trying to get schools open. And she’s been trying, sometimes uncomfortably, to act as a mediator between desperate parents grieving their kids’ interrupted educations and beleaguered teachers who feel they’re being blamed for a calamity they didn’t create.”

Weingarten told Goldberg, “Part of my job was to advocate for the safety measures that would help educators feel like they were safe… And that was a big responsibility. But my job was also to try and reopen schools, because remote learning was not going to help kids.” 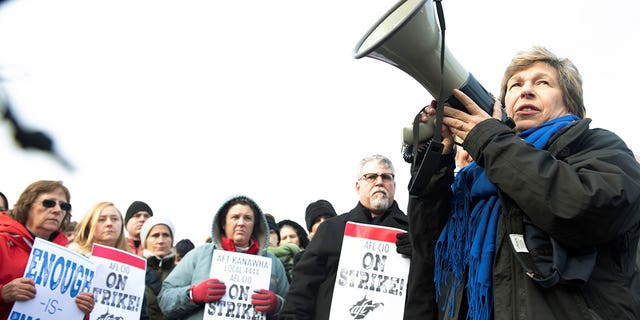 The Times columnist insisted Weingaten began strategizing the reopening schools as early as spring 2020 and “has been frank about the ongoing social costs of some Covid restrictions.” She also hightlighted a letter she sent to Education Secretary Miguel Cardona and CDC Director Dr. Rochelle Walensky asking them “for an off-ramp from school masking.”

“This was before the discovery of Omicron, which will almost certainly delay the end of mandatory school masking, at least in those parts of the country that continue to be vigilant about trying to curb Covid’s spread,” Goldberg wrote. “But it demonstrates how, contrary to the right’s caricature of her, Weingarten has been striving to get to a place of greater normalcy in schools.”

Following intense backlash on social media, the headline to Goldberg’s piece changed from “Can This Woman Save American Public Education?” to “We Desperately Need Schools to Get Back to Normal.”

Weingarten has a long history of moving the goalpost throughout the pandemic regarding the reopening of schools. Emails showed AFT influencing CDC guidance days before the Biden administration released school reopening guidelines in February.

It wasn’t until recent months that her tone has shifted as COVID restrictions become increasingly unpopular with Americans.