The four separate robberies were pulled off in a less-than-90-minute time frame. Witnesses in at least three of the incidents described seeing people flee with stolen coats, bottles and cash in a red SUV.

The first incident happened at about 3:20 a.m. at a liquor store in the 1900 block of West Fullerton Avenue.

Chicago police officers who responded to the scene discovered the store had been burglarized. A witness stated they saw several offenders take a register and liquor bottles from the store before fleeing the scene, police said. No injuries were reported, and no one was immediately taken into custody. 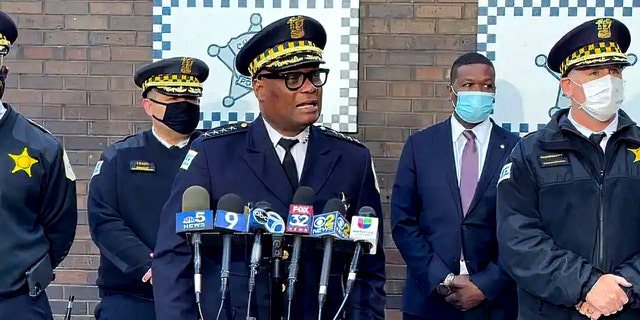 About 20 minutes later, police responded to a burglary at a liquor store in the 4900 block of North Damen Avenue around 3:40 a.m. and discovered the front glass door shattered. After a walk-through of the premises, it was determined that multiple bottles of liquor were taken from the store, police said.

A witness said they saw a male flee the scene in a red SUV. No one was immediately taken into custody in connection to the robbery, and Area Three detectives are investigating the incident.

Chicago police soon responded to an alarm at a North Face store in the 1600 block of North Damen Avenue just before 4 a.m. and discovered that the front entrance doors had been forced open. Witnesses told officers they saw two males exit the store carrying coats and flee the scene in a red SUV. There were no injuries reported and there is no one in custody, police said. Area Five detectives are investigating.

The fourth robbery happened at a liquor store in the 1100 block of West Taylor Street at about 4:40 a.m. Police said two offenders, described only as a male and female, shattered the front glass door of a business.

The suspects went inside and took bottles of liquor and an unknown amount of U.S. currency before hopping into a red SUV and fleeing northbound on Racine Avenue, police said. No injuries were reported, and no one was immediately taken into custody. Area Three detectives are investigating.

This comes as high-end retailers in Chicago are responding to an uptick in smash-and-grab robberies by hiring private security and implementing other measures once only reserved for terrorists.

For example, the Burberry store is now parking vehicles on the sidewalk in front of its entrance after hours to deter potential looting, CWB Chicago reported.

Danielle Wallace is a reporter for Fox News Digital covering politics, crime, police and more. Story tips can be sent to danielle.wallace@fox.com and on Twitter: @danimwallace.