Center for American Liberty CEO and civil rights attorney Harmeet Dhillon predicted a “split ruling” out of the Supreme Court in the case that will determine the legality of President Biden’s COVID-19 OSHA vaccine regulations.,

Center for American Liberty CEO and civil rights attorney Harmeet Dhillon predicted a “split ruling” out of the Supreme Court in the case that will determine the constitutionality of President Biden’s COVID-19 OSHA vaccine regulations.

The Supreme Court on Friday heard close to four hours of oral arguments over two of the Biden administration’s vaccine mandates – which have remained under intense legal scrutiny and have been struck down in battles across federal courts.

Dhillon, who is personally representing a client in the case, said the justices will likely uphold the mandate requiring health care workers to be vaccinated while overturning the rule applying to private companies with more than 100 employees.

“I think there may be a split ruling out of the court. I think on the case…challenging the large employer mandate, it looks to me like we have five or six votes to enjoin that order,” she said. “But on the one regarding medical facilities, because the order is tied to federal funding, I think there are some different arguments there and the justices seem more likely to uphold that OSHA mandate on medical facilities.” 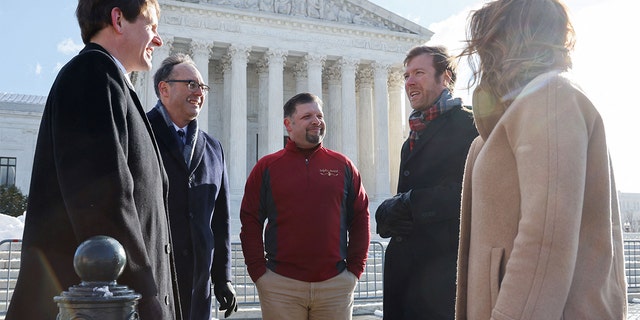 Brandon Trosclair, who owns grocery stores in Louisiana and Mississppi, poses for photos with his legal representatives before the U.S. Supreme Court hears arguments on his case against the Biden administration’s nationwide vaccine-or-test-and-mask COVID-19 mandates, in Washington, Jan. 7, 2022. REUTERS/Jonathan Ernst (REUTERS/Jonathan Ernst)

The first phase of Biden’s vaccine-or-test mandate for employees at applicable companies went into effect Monday despite the ongoing consideration from the High Court.

“Today is day one when the compliance is supposed to be occurring and that’s true for 80 million employees around the country,” Dhillon said, “so the fact the court is still sitting on this and hasn’t ruled yet produces tremendous expense, uncertainty, stress and disruption to the American economy. I really hope for the sake of all those employees, employers that the court rules quickly so that we can move on and arrange our affairs accordingly.”

If the court elects to strike down both mandates, Dhillon said “there will be many states, probably New York, California and other states, that decide it’s within their power to order this type of thing and we will have a fresh round of litigation over it.

“Meanwhile, we all know that this vaccine is not particularly effective against the current version of the virus,” she said, “so it all really undermines both citizen confidence in the judiciary and the legislature and in public health. This is really a bad situation for the future of public health in our country, the way the government is handling this particular situation.”