Sen. Joni Ernst, R-Iowa, dubbed the shift by Democrats generally, and Schumer, D-N.Y., specifically, the “filibuster flip-flop” – as she held up a pair of flip-flops as a prop. Ernst also went after President Biden, who is backing Democrats’ push to limit the filibuster for elections bills, over comments he made in 2005.

“Then-Sen. Joe Biden said the nuclear option, quote, ‘is a fundamental power grab for the majority party,'” Ernst said. “What has changed, folks?” 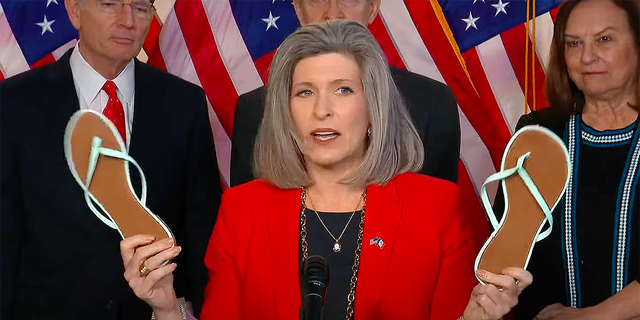 “I signed that letter at a time when it was hard. But I did it because I care about the institution of the Senate and the thing that makes our body different from any other deliberative body in the world,” Sen. Thom Tillis, R-N.C., said. “Thirty-two of my Democratic colleagues on that same letter, 27 of them are still here. I would ask them, what’s changed?”

Other senators rehashed Schumer’s past comments on the filibuster.

Sen. Mike Lee, R-Utah, recalled a Schumer quote from 2005 in which he said the filibuster was a key check that ensured if one party gets “51% of the vote, you do not get your way 100% of the time.”

“Chuck Schumer said ending the filibuster would be ‘doomsday for democracy,’ and turn America into a ‘Banana Republic,'” Sen. Ted Cruz, R-Texas, added. “He was telling the truth, in 2005, and it’s still true today.”

Senate Majority Leader Chuck Schumer waits Jan. 6, 2022, to speak during an event to mark one year since the riot at the U.S. Capitol. (AP Photo/Susan Walsh, Pool)

Democrats say that things are different now because of election laws passed by Republican states in the wake of the 2020 election.

“How can we in good conscience allow for a situation in which the Republican Party can debate and pass voter suppression laws at the state level with only a simple majority vote, but not allow the United States Senate to do the same?” Schumer said in a letter to fellow Democrats earlier this year.

But Democrats were already distancing themselves from their previous pro-filibuster stances before Republicans started passing those elections laws, including during the 2020 presidential election.

MANCHIN PRESSURED TO BACK FILIBUSTER CHANGES BY CLINTON, OBAMA, OPRAH

Schumer promised to bring up some kind of change to the filibuster by early next week if the Senate is unable to pass either of Democrats’ key voting bills under the 60-vote threshold – something that Republicans are making very clear they are not going to do.

But Schumer hasn’t said exactly what that change will look like, whether that’s a full vote on a Senate rule change at a 67-vote threshold, which would certainly not pass, a smaller carveout for voting rights bills passed with 50 votes via the nuclear option, or something else like the “talking filibuster.”

It’s also not clear whether Schumer will have all of his caucus on board to make the change. Sens. Joe Manchin, D-W.Va., and Kyrsten Sinema, D-Ariz., are staunch defenders of the filibuster. And other purple-state Democrats up for reelection, like Sen. Mark Kelly, D-Ariz., may have a very difficult time casting such a politically charged vote in an election year.