Firefighters in Basildon, Essex saved a French Bulldog puppy after it got its head stuck in a baby formula milk tin.,

These containers weren’t designed to be used by dogs.

A family in England had to call the local fire department to rescue a dog that had gotten its head stuck inside a baby formula milk tin. Fortunately, the workers were able to save the small animal without it suffering any injuries. 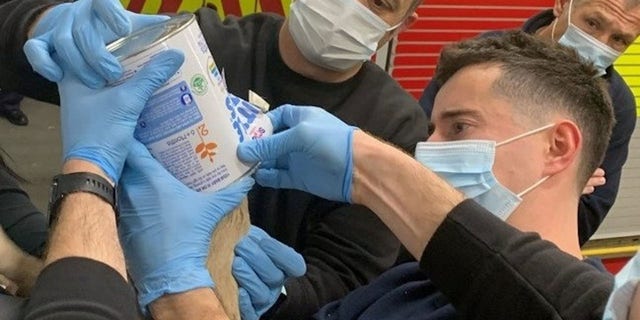 Firefighters in Basildon, Essex saved a French Bulldog puppy after it got its head stuck in a baby formula milk tin. (SWNS)

Workers with the Basildon Fire Station freed the six-month-old French Bulldog last Friday, Southwest News Service (SWNS) reports. The puppy had apparently gotten its head stuck inside the tin trying to get at the formula inside.

Fortunately, the firefighters were able to free the dog’s head without the animal suffering any scratches.

HEDGEHOG BALLOONS UP TO MASSIVE SIZE AFTER DEVELOPING RARE CONDITION 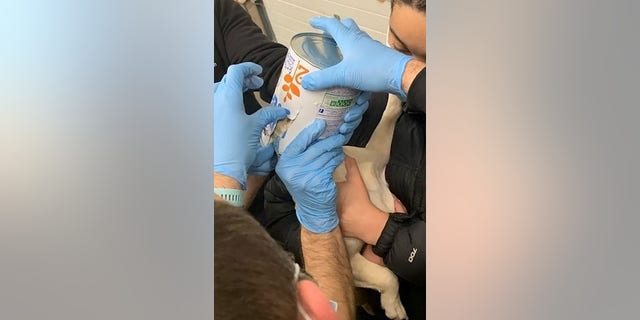 The six-month-old French Bulldog was rescued from the tin without any injuries. (SWNS)

“Clearly, this wasn’t a typical incident for our firefighters but when Bo and his owner arrived, we knew we’d be able to help,” Howard Midwood, manager at Basildon Fire Station, said. “I’m really proud of our firefighters who have done a professional job tonight in releasing Bo quickly and safely.”

He continued, “We’re pleased that Bo was able to get home without any scratches or grazes – but hope he doesn’t try and treat himself to any more milk formula!”

This is just the latest animal to be rescued from a tricky situation.

Last week, Fox News reported that crew members from SeaWorld rescued a sea lion on Friday after it somehow ended up on a busy highway in San Diego. Fortunately, the animal was successfully captured and removed from the scene without issues.

The incident occurred around 9:40 a.m., Fox 5 reports. The animal was spotted in the eastbound lane of Route 94, near the Mount Hope neighborhood.

Traffic on the highway slowed down after drivers noticed the animal.

Crew members from nearby SeaWorld were called to the scene to help capture the animal. The workers were able to use a net to secure the animal and then move it to safety. After the workers secured the animal, it was loaded into a truck and transported to another location.