Nathan Chen back on game, soars to short program win at nationals

And that was just for the short program.

Those were some of the reactions from the skaters themselves Saturday after Nathan Chen, clearly back on his game, set a short program record at the U.S. Figure Skating Championships on Saturday.

Indeed, four skaters broke the 100 mark as they took aim on the three berths available to Americans for next month’s Beijing Olympics. 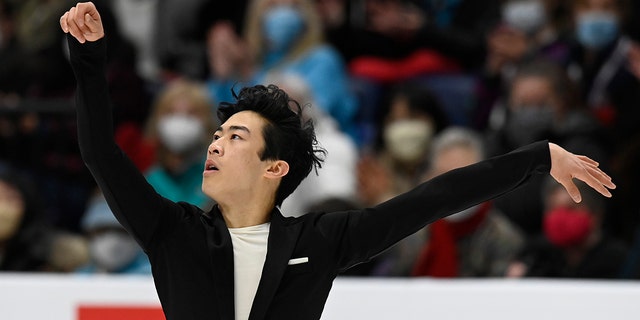 Led by the three-time world champion who is chasing his sixth consecutive U.S. crown, something not done since two-time Olympic winner Dick Button got seven in a row from 1946-52.

With a performance full of superb footwork and spins — oh, yeah, there were two massive quads in it, too — Chen sent a message to all his competitors, here and abroad.

That was too high, above the ice and on the judges’ score sheets, for Vincent Zhou. Chen’s main competition here was excellent, though, appearing relaxed and confident throughout his program as he nailed the same quad lutz-triple toe loop that Chen did for a score of 112.78 that also was a personal best.

“One of the craziest short program events ever probably,” Zhou said. “The general idea, the pressure was on, so I’m honored to have the opportunity to compete in this field.”

“I mean, it’s amazing to have such strong U.S. competitors, especially heading into an Olympic season,” Chen said. “Regardless who gets to go, we’ll have a really strong team there. But you focus on yourself, I can’t control anything else.”

Chen’s struggles at October’s Skate America were stunning given his run of 14 consecutive victories since the 2018 Olympics. His quick return to the top began a week later with a win at Skate Canada, and Saturday, he was as good as ever.

Chen, 22, and two-time Olympic champion Yuzuru Hanyu of Japan will be the favorites at the Beijing Games. No man has won three consecutive Olympic golds in the modern era. Chen has not lost to Hanyu since Pyeongchang, when a fiasco in the short program doomed Chen’s chances. Hanyu recently won the Japanese nationals, but his short program score was more than four points lower than Chen’s on Saturday.

“I’m grateful to have the opportunity to compete and not have the Olympics be my first since the Grand Prix,” Chen explained.

Zhou, 21, has ridden something of a roller coaster in his senior career, highlighted by a bronze medal at the 2019 worlds, three U.S. silver medals behind Chen, and the Skate America triumph earlier this year.

Last March, he fell apart in the short program at the world championships and didn’t even qualify for the free skate. That forced him to participate in the Nebelhorn Trophy to secure a third men’s Olympic spot for the U.S.; in a clutch performance, he won.

Now, Zhou seems destined for his second Olympics; he was sixth in South Korea, one spot behind Chen.

Malinin, a rising force on the U.S. scene after a strong previous season in the junior ranks, has been referred to by his fans as a “quad god.” He certainly lived up to that billing with a quad-filled program and some dynamic spins.

“My reaction was surprising to see it,” Malinin said of his score, “because I kind of dreamed of getting over 100, but I never knew I could do it. Now that I think about it, if you put in the time and the effort you can achieve anything.

Brown, 27, made the U.S. squad for the 2014 Sochi Games, earning a bronze medal in the team event when he performed the free skate. He was beaten out for the 2018 Olympics, but displayed once more his staying power in Saturday’s short program.

Getting to Nashville probably was more challenging logistically than performance-wise for Brown, given the snowstorm and frigid temperatures this week.

“After 33 hours of travel, 5 cancelled flights, 4 airline changes, 3 airports, 2 countries, an overnight in Atlanta, a rental car, and a ton of help… We officially made it to Nashville!” he posted on social media.

Then he put out a flowing, powerful, high-speed routine that had the crowd on its feet well before Brown finished with a flourish, then sat on the ice, soaking in the cheers.

Still, unable to match the quads of Malinin, Brown’s 100.84 points placed him fourth — with that ever-present smile on his face anyway.

“For me it was the only thing I knew was the reaction of the crowd, which was awesome to see them all on their feet,” he said. “And then the scores came up. But for me it’s what you can do in that moment, putting your best foot forward and skating your skate. I can only win at my own game.”