A five-alarm fire broke out in a high-rise in the Bronx on Sunday morning.,

Multiple people, including children, were killed and dozens were injured in a five-alarm fire that broke out in a high-rise apartment building in the Bronx, fire sources confirmed to Fox News.

A fire official told Fox News there were more than 60 injuries in total. That included four firefighters, one of whom was seriously injured, though none of their injuries is life-threatening, the fire official said.

More than 30 civilians had life-threatening injuries, he said, adding that nearly a dozen children and at least 10 adults were killed.

“Approximately 200 FDNY members are operating on scene of a 5-alarm fire at 333 East 181 Street in the Bronx,” the New York City Fire Department tweeted earlier Sunday, adding that there were more than 30 “serious injuries to civilians.”

“We expect numerous fatalities,” FDNY Commissioner Daniel Nigro said during a press conference. He said it was one of the worst blazes in the city in recent memory. 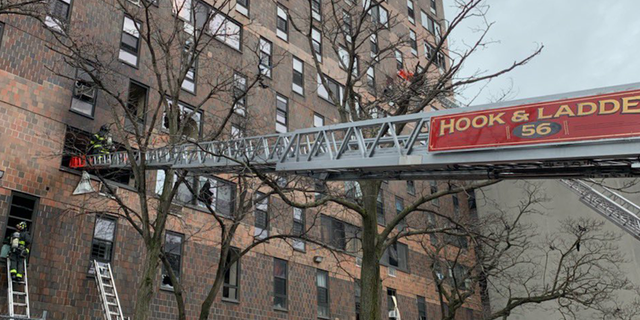 “The smoke conditions in this building are unprecedented,” Nigro added.

Smoke inhalation was the cause for the injuries and no one was burned, according to authorities.

The fire started on the second and third floors of the building in a duplex apartment in the Tremont section of the Bronx, the New York Times reported. The fire began just before 11 a.m.

Photos posted online showed a rescue ladder extended up to an eighth-floor window. More than 30 people were transported to five hospitals, with the majority of victims suffering from severe smoke inhalation, Nigro said.

Nigro compared the severity of the fire to the Happy Land social club fire, which killed 87 people in 1990 when man set fire to the building after getting into an argument with his former girlfriend and being thrown out of the club.

According to Nigro, Sunday’s fire originated in a duplex apartment spanning the second and third floors. Firefighters found the door to the apartment open, he said, which apparently allowed the fire to accelerate and spread smoke upward quickly.

The fire is not believed to be suspicious in origin, but the cause is under investigation.