Todd McMurtry, who helped Sandmann reach a settlement with CNN over a defamation lawsuit, said Biden could be held accountable for the Sept. 30, 2020 social media post weeks before he was elected.

“There’s no other way to put it: the President of the United States refused to disavow white supremacists on the debate stage last night,” Biden’s tweet said.

The remarks were accompanied by a video showing White nationalists marching in Charlottesville, Virginia, and other images. A voice-over of Fox News’ Chris Wallace is heard asking then-President Trump during a presidential debate if he was willing to condemn White supremacists and militia groups.

At one point in the video, an image of Rittenhouse shows him holding an AR-style rifle on the night he killed two protesters and wounded a third in Kenosha, Wisconsin, during unrest after the police shooting of Jacob Blake a month earlier.

“What you take from that tweet is that Kyle Rittenhouse was using his rifle and engaging in White supremacist misconduct so it’s actionable,” McMurtry told Fox News. “Not necessarily going to win, but it’s actionable.”

A Kenosha County jury acquitted Rittenhouse on Friday of all the charges against him, including first-degree intentional homicide and recklessly endangering safety.

McMurtry noted Biden was not president at the time of the tweet, meaning he would not have any presidential or congressional immunity. Rittenhouse’s mother, Wendy Rittenhouse, told “Hannity” last week that Biden cast her son as a White supremacist for votes.

“When I saw that I was shocked, I was angry. President Biden don’t know my son whatsoever, and he’s not a White supremacist,” she said. “He’s not a racist. And [Biden] did that for the votes. And I was so angry for a while at him and what he did to my son. He defamed him.” 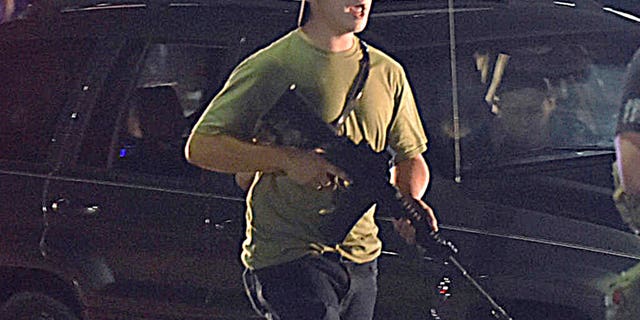 In this Tuesday, Aug. 25, 2020, file photo, Kyle Rittenhouse carries a weapon as he walks along Sheridan Road in Kenosha, Wis., during a night of unrest following the police shooting of Jacob Blake. (AP/The Journal Times)

During an appearance on Fox News’ “America Reports,” Leo Terrell, a civil rights lawyer and Fox News contributor, said Biden had no facts to justify his remarks.

“Let me give Joe Biden advice: Be very careful what you say because you’re subject to a possible defamation lawsuit,” Terrell said after the verdict. “This was a statement that Joe Biden is going to have to pay for and justify.”

The reactions against Rittenhouse and McMurtry’s former client have parallels: both were minors and were private figures, McMurtry said. To hold someone liable for defamation against a private figure, lawyers would only have to prove negligence on the part of whomever made the defamatory statement as opposed to actual malice, a higher burden of proof for public figures such as celebrities and elected officials, McMurtry said.

Sandmann, a Kentucky resident, and CNN settled a $250 million defamation lawsuit in January 2020 over the network’s coverage of his viral confrontation with a Native American man in Washington D.C. A video clip showed Sandmann wearing a “MAGA” hat around his classmates and smiling at Nathan Phillips, who was beating a drum and singing at the Lincoln Memorial.

Many media outlets portrayed the incident as being racially charged before additional footage appeared to show a group of Black Hebrew Israelites had provoked the confrontation.

“I think Rittenhouse may be able to do the same thing when commentators on MSNBC say he’s a school shooter, a White supremacist, even a vigilante,” McMurtry said of a lawsuit against media outlets. “Lots of media people said he was a murderer, and I think that’s actionable because that suggests that he committed a crime, and we now know that he didn’t.”

“When you just throw this stuff out there, you take risks,” he added.