Residents of this small U.S. city in Washington state along the Canadian border were assessing damage from flooding that hit an estimated three-quarters of homes.,

Residents of this small U.S. city along the Canadian border were assessing damage from flooding that hit an estimated three-quarters of homes, as Washington state and British Columbia tried to dry out from an intense, days-long rainstorm that cut off key roadways and forced hundreds of evacuations.

Skies were sunny Wednesday morning in the area around Sumas, Washington, where about 500 rescues and evacuations were reported.

“We’re looking at going door-to-door, as waters go down in different parts of town,” Sumas Mayor Kevin Christensen told The Seattle Times. “Half is on dry ground, half has water.” 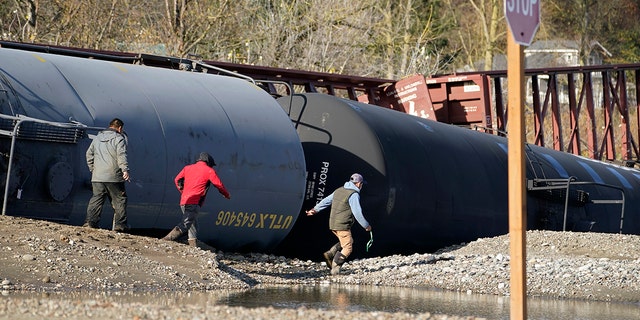 By Wednesday afternoon, only one river in western Washington had active flood warnings.

The soaking fueled by a so-called atmospheric river that dumped torrents of rain on the Pacific Northwest and British Columbia from Saturday through Monday reminded people of western Washington’s record, severe flooding in November 1990, when two people died and there were more than 2,000 evacuations.

While the weather was improving, the situation remained dire in British Columbia, where the Canadian government was sending in the military to help with floods and mudslides that destroyed parts of several major highways. One death was reported and officials said Wednesday that more deaths were expected.

Immediately across the border from Sumas, police using helicopters and boats had evacuated about 180 residents of a flooded low-lying area of Abbotsford, British Columbia. Evacuations continued Wednesday.

Mayor Henry Braun said Wednesday that conditions were bad overnight because a key pumping station was in danger of being overwhelmed. He said crews spent Tuesday night sandbagging around the station and things were “holding steady.” 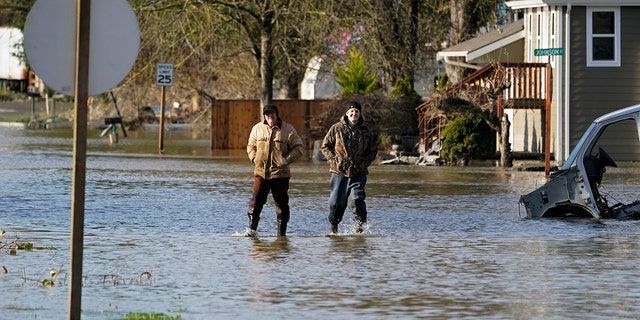 “I’m feeling much better today than last night,” Braun said, although he cautioned the danger had not passed.

Those evacuated in Abbotsford joined thousands of others in the province who were forced from their homes by floods or landslides starting Sunday night.

On Facebook, the City of Sumas said Wednesday that water levels were continuing to drop and it looked like the community wouldn’t be affected by additional potential flooding in Abbotsford. It said crews were working hard to clear roads and return power to some parts of town.

“These families and businesses need our prayers and support as we start the process of cleanup and rebuilding over the next few days,” the city said in another Facebook post.

To the south, a flood warning for Washington’s Skagit River will remain in effect until Thursday because it will take time for the floodwaters to drain, the National Weather Service said. Officials recommended that residents of several nearby islands evacuate.

Across the border, the body of a woman was recovered from a landslide near the small community of Lillooet, British Columbia. Royal Canadian Mounted Police said at least two other people were reported missing.

In Washington’s Whatcom County, home to Sumas, the county sheriff’s office said on Facebook that authorities and search crews on Wednesday had located a body believed to be a 59-year-old man who had last been seen clinging to a tree after his truck was swept into a flooded field in the town of Everson.

In the city of Ferndale, also southwest of Sumas, officials had urged people in homes and businesses Tuesday to evacuate near the rising Nooksack River and bystanders had rescued a man who had driven into floodwaters by mistake.

Evacuation notices were rescinded Wednesday and the flood warning had ended by Wednesday afternoon. Southwest of Ferndale, authorities said Wednesday that all routes off the Lummi Peninsula, home to the Lummi Nation, were closed because of water over the roads.

Officials in the city of Bellingham said only a few roads there remained closed on Wednesday because of flooding and officials were also assessing damage. 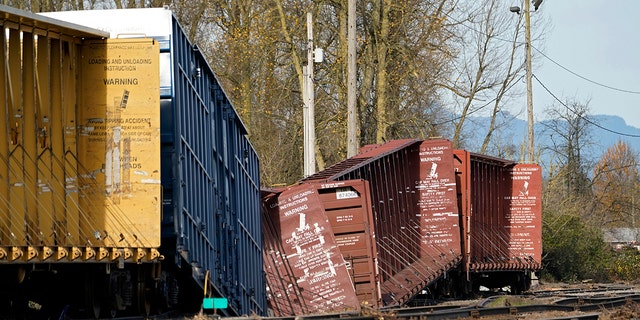 More rain fell in Bellingham from Saturday through Monday – about 5.57 inches – than normally falls there during all of November, according to National Weather Service data. The normal monthly rain total is 5.2 inches for November, the weather agency said.

Transportation officials on Washington’s Olympic Peninsula – where the Coast Guard earlier in the week rescued 10 people stranded by floodwaters – on Wednesday were also assessing conditions and clearing debris from roads.

Officials said Wednesday that in the far northwest corner of the peninsula, people on the Makah Reservation have been prevented from leaving or entering because of landslides on nearby highways, The Seattle Times reported.

Washington Gov. Jay Inslee on Monday declared a severe weather state of emergency in 14 counties. On a visit to Whatcom County Wednesday, he said some 500 homes had damage from the storms.

Inslee said he spoke with the mayors of Everson and Sumas and was astonished at the devastation he saw, The Bellingham Herald reported.

“I’m told they did top all-time flood levels in some places,” he said.

Some of the floodwaters came after warmer rains quickly melted 4 feet of snow that previously fell in the Mount Baker wilderness. Inslee said Whatcom County should prepare for repeated floods and address the causes of climate change.

“We have to realize that we’re going to face decades of increased floods in our state of Washington,” he said.

Inslee promised to use state and federal money, including funds from President Joe Biden’s recent infrastructure bill, to ease the effects of climate change.