Knox reportedly said she has sent messages to the family of former friend and roommate Meredith Kercher, who she was wrongly accused of murdering in Italy, saying she wants a relationship with them. She also said she finds herself thinking ‘oh my god, it could have been me’ every year around the time of the anniversary of the 21-year-old’s British student’s death.

Knox and her former boyfriend, Raffaele Sollecito, were convicted in 2009 of the murder and sexual assault of her former roommate Kercher. She was acquitted in 2011 after spending four years in custody. The murder conviction was reinstated in 2014, but she was definitively acquitted by Italy’s highest court in 2015. 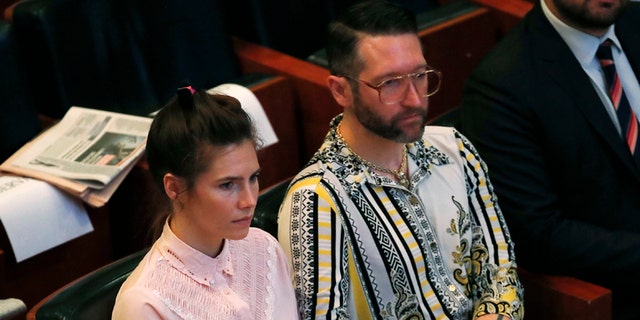 Amanda Knox holds hands with her fiancee Christopher Robinson as they attend a conference during a Criminal Justice Festival at the University of Modena, Italy, Friday, June 14, 2019. Knox, a former American exchange student who became the focus of a sensational murder case, arrived in Italy Thursday for the first time since an appeals court acquitted her in 2011 in the slaying of her British roommate. (AP Photo/Antonio Calanni)

The 34-year-old and husband Christopher Robinson announced in October that they recently welcomed a baby girl named Eureka Muse.

Knox explained she “couldn’t help but put myself in her mom’s shoes” but hadn’t spoken to Kercher’s family directly yet. “I know that it’s a complicated situation,” she explained, adding that she didn’t want to “force a relationship on them.”

Fox News reported in December 2020 Guede was released from prison and is being allowed to finish his sentence with community service. He was granted release so he could pursue a master’s degree and work in a library of a criminology center, The Telegraph reported.

Earlier this year Knox lashed out at the new Matt Damon film “Stillwater” — claiming the movie profits off her real-life struggle for a wrongful murder conviction. 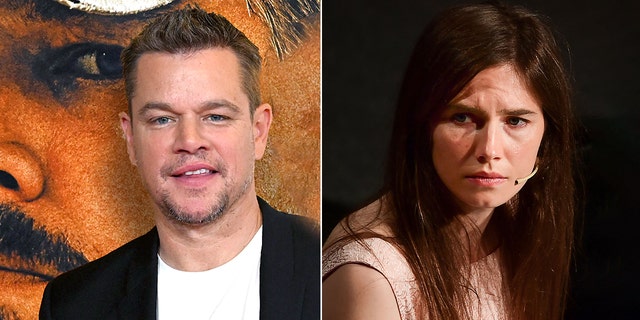 US journalist Amanda Knox (L) attends a panel discussion titled “Trial by Media” during the Criminal Justice Festival at the Law University of Modena, northern Italy on June 15, 2019. – Knox returns to Italy for the first time since the US student was acquitted in 2015 of the gruesome killing of her British housemate after spending four years behind bars. The Seattle native, now 31, was 20-years-old at the time of the murder of Briton Meredith Kercher, a fellow exchange student whose half-naked body was found on November 2, 2007, in a bedroom of the apartment she and Knox shared in the central city of Perugia. (Photo by Vincenzo PINTO / AFP) (Photo credit should read VINCENZO PINTO/AFP via Getty Images) ____ Actor Matt Damon arrives for the premiere of “Stillwater” at the Rose Theatre, Jazz at Lincoln Center in New York on July 26, 2021. (Photo by TIMOTHY A. CLARY / AFP) /
( Photo by TIMOTHY A. CLARY / AFP | VINCENZO PINTO/AFP via Getty Images)

Knox lamented how her name continues to be associated with a killing she didn’t commit – and is now linked to a film she had no part in making.