Police in New York City are searching for a male and female who were seen assaulting a 50-year-old man with a hammer and a gun inside a Bronx bodega last month.,

The NYPD has released video showing a pair of suspects smashing a man with a hammer before firing a gunshot at him during an assault at a Bronx bodega last month.

The 50-year-old victim and the male and female suspects got into an argument around 9:55 p.m. inside the bodega located on Morris Park Avenue in the Van Nest neighborhood on Dec. 26, police said.

The male suspect had allegedly accused the victim of leering at his girlfriend, WABC-TV reported.

As the verbal dispute escalated, the female suspect hit the man with a hammer, while the male suspect drew a gun. (NYPD, Crime Stoppers )

The verbal dispute escalated, and the female suspect brandished a hammer and struck the victim in his head, police said. Video shows that as she continued to smash the victim with the hammer outside the store, the male suspect fired one shot from a gun and struck the side of the building. 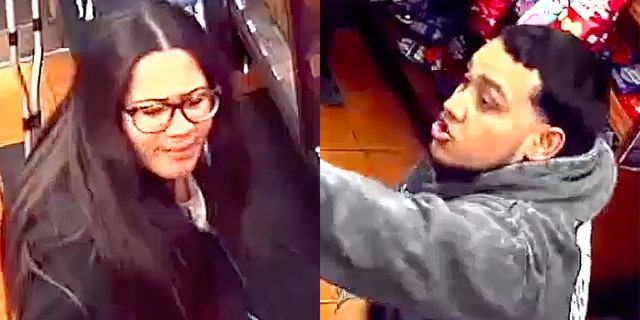 The NYPD is looking for a female and male suspect in connection to an assault at a bodega in the Bronx on Dec. 26. (NYPD Crime Stoppers )

The suspects fled the scene and first responders arrived to take the victim to the hospital. He was received stitches for his injuries and was in stable condition, police said.