A recording of a 911 call released Tuesday captures the frantic on-scene moments an off-duty North Carolina deputy tells an emergency operator he shot Jason Walker, who he claims jumped on his truck, ripped off a windshield wiper and began beating the glass in Fayetteville over the weekend.,

A recording of a 911 call released Tuesday captures the frantic on-scene moments an off-duty North Carolina deputy tells an emergency operator that he shot another man who he claims jumped on his truck, ripped off a windshield wiper and began beating the glass in Fayetteville over the weekend.

Lt. Jeffrey Hash, who has since been placed on leave by the Cumberland County Sheriff’s Office, dialed 911 on Jan. 8 at 2:18 p.m. after he is accused of fatally shooting a Black man identified as Jason Walker.

On the three-minute-51-second call, Hash explains that he was trying to protect his wife and daughter, who were also inside the pickup truck, when he shot the man beating on their windshield.

His tense exchange with a “trauma nurse” at the scene helping to apply pressure to Walker’s wound is heard, as the off-duty deputy also claims a crowd of people gathering around him were becoming increasingly “hostile.”

“Yes, ma’am. It’s an emergency. I’m on Shenandoah and Bingham Drive. I just had a male jump on my vehicle and break my windshield. I just shot him,” Hash is heard telling the 911 operator. 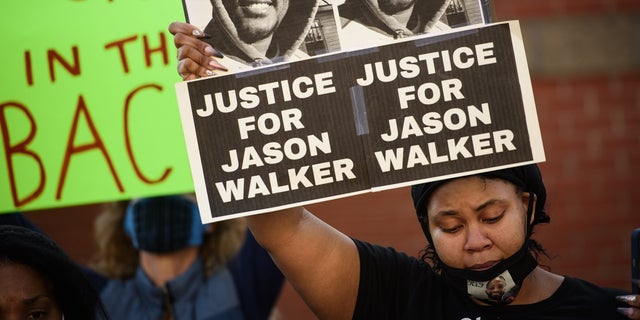 Pandora Harrington holds up a sign with an image of Jason Walker during a demonstration in front of the Fayetteville Police Department on Sunday. Walker, 37, was shot and killed on Saturday by an off-duty deputy with the Cumberland County Sheriff’s Office. The deputy, Lt. Jeffrey Hash, has been placed on administrative leave. (Reuters)

“You said you shot him?” the dispatcher asks. The off-duty deputy replies, “Yes, he jumped on my car.”

“I understand what you’re saying. I’m just trying to get help to you. What’s your name?” she asks.

The caller identifies himself as a lieutenant with the Cumberland County Sheriff’s Office.

“Listen to me, are you right beside the subject?” the dispatcher presses, asking if the man is breathing.

“When did this happen,” the woman asks. “Just now,” the off-duty deputy replies. “I need you to get help because there are people gathering.”

The caller tells the dispatcher he is in a red Ford F-150 truck.

“He had shattered my windshield,” the caller insists, before the sound of others at the scene begins.

“I’m a deputy sheriff,” the man tells someone else there asking what happened. “Come here. He jumped on my vehicle. I just had to shoot him.”

“Can you tell me what happened?” the dispatcher begins again.

“I was driving down the road, and he came flying across Bingham Drive running. And then I stopped, so I wouldn’t hit him,” the caller explains to the 911 operator. “And then he jumped on my car and started screaming, pulled my windshield wipers off and started beating my windshield and broke my windshield. I had my wife and my daughter in my vehicle.”

“Did he have any weapons, sir?” the dispatcher asks. The man replies, “No, he just tore my wipers off and started beating the door… he busted my windshield. I don’t know, ma’am.”

The dispatcher tells him to take a deep breath and asks how many people are now surrounding him.

“There’s tons of cars and people gathering around,” he says. “He has a light pulse. I need EMS now.”

“I have a trauma nurse out here,” the caller says, as a female voice in the background is heard saying she can’t determine where the entry point was.

The off-deputy tells her, “Did you find the holes, ma’am? I’m seeing blood on the side, ma’am.”

The woman at the scene says she needs a shirt or something for the bleeding.

“Is she getting a clean dry cloth?” the dispatcher asks. The caller is heard saying, “Here’s a towel.”

“We are plugging the holes now,” the caller tells the dispatcher, as the woman at the scene continues to talk in the background, though most of what she’s saying sounds muffled.

“Tell her to keep pressure on the hole,” the dispatcher says.

Several other voices at the scene start calling, “Where did you shoot him?” repeatedly.

The deputy insists, “I don’t know. He was on the front of my vehicle. He jumped on my car.”

TEXAS TEEN SLEEPING IN HER BED SHOT AND KILLED IN DRIVE-BY SHOOTING: ‘DID NOT DESERVE THIS’

“Where is the entry point?” a woman screams. The man insists again, “I do not know.”

“Alright, don’t engage with them. Just talk to me, OK?” the dispatcher asserts.

“People are hostile right now,” the caller responds, explaining he’s trying to understand where his wife and daughter are as more people gather. “I understand people are hostile,” the dispatcher says, adding, “you just talk to me, OK? We have units. Let me know when they are with you, OK?” 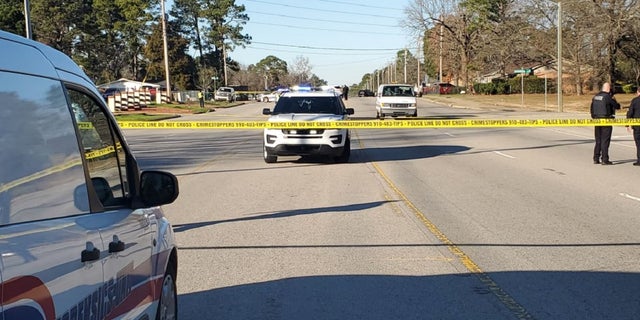 Investigators with the NC SBI have assumed the investigation surrounding the shooting that occurred on Jan. 8, 2022, along Bingham Drive. The investigation has revealed the driver of the truck, who shot Jason Walker, was an off-duty Cumberland County Sheriff’s Deputy.

“They’re pulling up now,” the man says, as sirens blare in the background and the dispatcher tells him to stay on the line until law enforcement are “right up beside you.”

Just talk to me and don’t engage with the people,” the dispatcher says. The off-duty deputy responds, “I’m trying, I’m trying to just protect my family. That’s all.”

The caller tells the dispatcher no one else is hurt.

They say goodbyes, and the call ends.

Elizabeth Ricks has identified herself as the former nurse who was placing pressure on Walker’s wounds before EMS personnel arrived at the scene. In a recent on-camera interview with WTVD, she claims she saw a red truck from behind “in clear view brake and then completely stop and then kept going.”

“Then as we were approaching, I saw him hit Jason, and from what I saw from behind, at first, when that part happened, was he hit him and Jason hit forward and his body was slammed onto the windshield,” Ricks claimed to the outlet. “Then I heard the gunshots. The first one I saw from the looks of it, he shot through the windshield first. Then he started shooting three other shots.”

Investigators have pleaded for additional eyewitnesses to come forward, though police initially said a review of body camera footage did not show anyone at the scene claim the truck struck Walker.

The call was released Tuesday after activist groups staged protests in Fayetteville on Sunday and Monday, disputing the account of events released by the police department.

Fayetteville Police Chief Gina Hawkins and Cumberland County District Attorney Billy West have asked the North Carolina State Bureau of Investigation to launch a probe into the shooting, a news release published Monday said. The FBI’s Charlotte Field Office said it was aware of the investigation and was in regular contact with local and state authorities about the incident.

“If, in the course of the North Carolina SBI investigation, information comes to light of a potential federal violation, the FBI is prepared to investigate,” the FBI said in a statement.

Hash has been placed on administrative leave pending an internal investigation. He has been with the sheriff’s office since 2005. Parrish Daughtry, the attorney representing Hash, couldn’t discuss the specifics of the case, but said Tuesday that her client was upset about the shooting.

“Lt. Hash is devastated for Mr. Walker’s family, his own family, the greater community and devastated by these events,” Daughtry said. “Beyond that, I’m really prohibited from discussing the facts.”

Ben Crump, the civil rights attorney who secured the record $27 million settlement for the family of George Floyd and has been retained by the Walker family, issued a statement on Tuesday.

“We have reason to believe that this was a case of ‘shoot first, ask later,’ a philosophy seen all too often within law enforcement,” Crump said. “We look to the North Carolina SBI for a swift and transparent investigation so that we can get justice for Jason and his loved ones.”

Local officials have called for patience and calm as the investigation into the incident continues.

“We ask people to give some patience and calmness,” Fayetteville Mayor Mitch Colvin said Monday. “Let us be there for the families in the meantime. I’m sure they want justice, they want answers, just like we want the same thing, and we ask people to remain calm. We’ll get a lot more accomplished by doing it the right way through the system.”