The New York Times is calling for a reduction in the amount of salt used on roadways during the winter months, citing experts in claiming the substance is an “environmental pollutant” that has “damaging consequences.”,

The New York Times is calling for a new solution to reduce the use of salt to preserve the use of roadways during the winter months, citing growing research in claiming the substance is an “environmental pollutant” that has “damaging consequences.”

In a Friday piece headlined, “Road Salt Works. But It’s Also Bad for the Environment,” Times reporter Jenny Gross cited a number of experts in advocating for the use of alternative methods to combat the “damaging environmental and health consequences” for people, as well as wildlife, caused by salt on the roadways.

“As snowstorms sweep the East Coast of the United States this week, transportation officials have deployed a go-to solution for keeping winter roads clear: salt,” Gross wrote. “But while pouring tons of salt on roads makes winter driving safer, it also has damaging environmental and health consequences, according to a growing body of research.”

She added that as snow and ice melt from the roadways, the salt washes into nearby soil, lakes and streams, sometimes contaminating sources of drinking water and freshwater wildlife habitats because of high chloride levels. 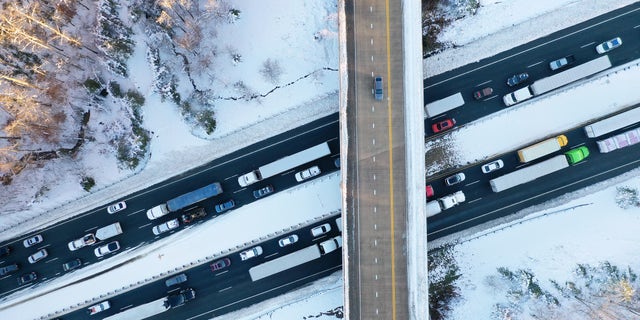 STAFFORD COUNTY, VIRGINIA – JANUARY 04: In an aerial view, traffic creeps along Virginia Highway 1 after being diverted away from I-95 after it was closed due to a winter storm on January 04, 2022 near Fredericksburg in Stafford County, Virginia. (Photo by Chip Somodevilla/Getty Images)

“More than 20 million metric tons of salt are poured on U.S. roads each winter, according to an estimate by the Cary Institute of Ecosystem Studies in New York, and the environmental costs are growing,” Gross wrote, while also referencing comments by an environmental manager at the Cary Institute who claimed that because of salt’s cheapness and effectiveness, little had been done to address its environmental impact.

Gross went on to cite a number of studies that showed a significant elevation of sodium levels in the water in parts of New York.

“More counties and states are rethinking the amount of salt they use because of the associated costs,” she added, noting that Democratic New York Gov. Kathy Hochul recently announced appointments to a task force established to review road-salt contamination.

“Road salt also corrodes vehicles and bridges, causing $5 billion in annual repairs in the United States,” Gross wrote, referring to an estimate by the Environmental Protection Agency and adding that AAA suggests drivers wash their vehicles regularly and limit driving to help offset the effects of road salt when at its highest concentration. 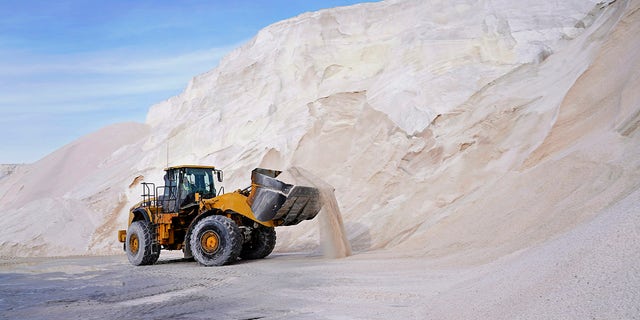 A front loader works at a large pile of road salt, Wednesday, Dec. 16, 2020, in Chelsea, Mass., as preparation continues for a storm that is expected to dump a foot or more of snow throughout the Northeast. (AP Photo/Elise Amendola) (AP)

“While there is not a perfect solution to the issue, there are alternatives that can significantly reduce salt usage without compromising driver safety,” Gross wrote, citing the Cary Institute, claiming that treating roads before storms with a “salt brine solution” would reduce salt usage by 75% while still keeping roads just as safe.

She added that building better salt storage sites could minimize waste as well.