Visitors at the Tara Gold and Country Club in Florida spotted an alligator carrying a fish from one lake to another.,

Everyone needs to take their lunch to-go sometimes.

Whenever playing golf in Florida, players know to be on the lookout for alligators near the water hazards. A group of golfers were recently reminded of that fact when they witnessed an alligator emerge from one lake carrying a fish in its mouth. 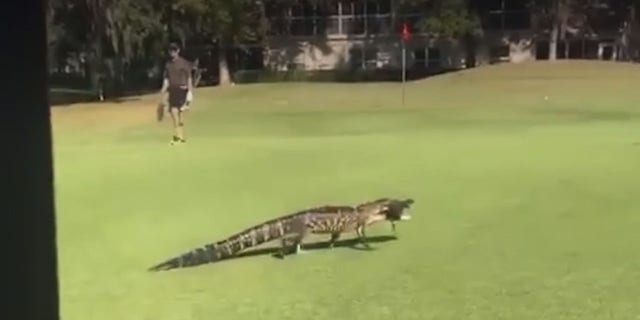 Visitors at the Tara Gold and Country Club in Florida spotted an alligator carrying a fish from one lake to another. (Mike Murphy)

The gator then walked across the course towards one of the other lakes. Apparently, it had to take its lunch with it on the trip.

Mike Murphy captured images of the scene at the Tara Gold and Country Club in Bradenton, Florida, Fox 35 reports. 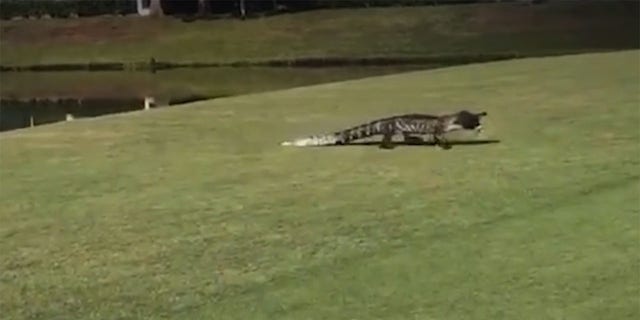 Golfers in Florida need to pay attention close to the water hazards since alligators are known to live in every county of the state. (Mike Murphy)

Alligators are found in every county of Florida and state officials urge residents to be careful near bodies of water, although alligators have popped up in other surprising locations.

Last November, Fox News reported that police officers in Collier County witnessed an alligator cross a road in the middle of the night and head into an apartment complex’s parking lot. The gator then settled under an unsuspecting resident’s car.

Fortunately, the officers were able the spot the car that the animal eventually hid under. This was good news for the car’s owner, who apparently was headed towards the car and was unaware of the reptile’s presence.

Based on photos taken at the scene, he may not have noticed the predator hiding under the car until he was standing right next to it.

Authorities contacted a trapper, who arrived on the scene and help catch the animal. It was then loaded in the back of a pickup truck, where it was taken to a safe area without incident.