Antonio Brown’s lawyer went on the offensive Sunday in a series of tweets aimed at the fallout of the wide receiver’s situation with the Tampa Bay Buccaneers., 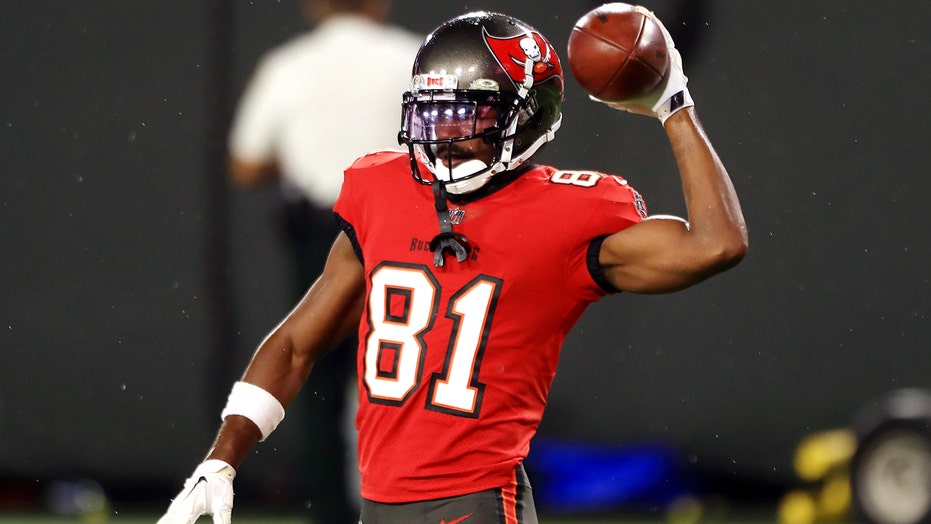 Antonio Brown‘s lawyer went on the offensive Sunday in a series of tweets aimed at the fallout of the wide receiver’s situation with the Tampa Bay Buccaneers, one week after Brown abandoned the team in the middle of a game.

Sean Burstyn, Brown’s lawyer, wrote in a Twitter thread that the chief issue was the timing of the Buccaneers’ decision to release the wide receiver while Brown was planning to see a team-recommended doctor for his ankle issue.

Tampa Bay Buccaneers wide receiver Antonio Brown wipes his face as he leaves the field after throwing his equipment into the stands during the third quarter against the New York Jets, Sunday, Jan. 2, 2022, in East Rutherford, N.J. (Andrew Mills/NJ Advance Media via AP)

“We were in the midst of scheduling an appointment with the Bucs’ chosen surgeon when we learned, via Twitter, that they terminated AB on Thursday for not seeing that very same surgeon. On Wednesday night, the Bucs had concocted their bogus scheme to engineer a way to cut AB,” Burstyn wrote.

“The Bucs picked an arbitrary appointment time outside of normal business hours early Thursday morning. They also fumbled around with a Wednesday afternoon appt at the last minute. (Bucs’ new interest in AB’s health was a surprise. Wasn’t AB ‘not a Buc’ on Sunday night?).”

Burstyn tweeted that the doctor they were seeing asked whether Brown and his camp could reschedule because the doctor hadn’t seen an MRI or CT scans.

“Knowing they can’t stand by Bruce Arians’ decision to cut AB for refusing to play through an injury, the Bucs formally claim to have fired AB for refusing to show up to a doctor’s appointment. But that’s misleading because the appt was being rescheduled to later the same day,” Burstyn added. 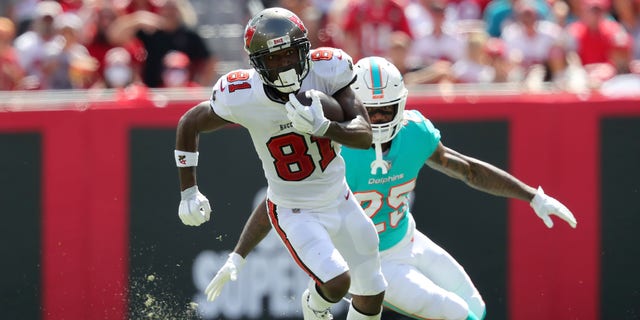 Tampa Bay Buccaneers wide receiver Antonio Brown (81) makes a catch and goes the distance for a score during a game between the Miami Dolphins and the Tampa Bay Buccaneers Oct. 10, 2021 at Raymond James Stadium in Tampa, Fla. (Cliff Welch/Icon Sportswire via Getty Images)

“Most people schedule doctor’s appointments for healing. In our view, it’s unusually perverse for the Bucs to use medical care as a setup to fire someone. Doctors are heroes, not pawns.

“The Bucs did this because they know that Coach Arians’ on-the-field termination of AB was degrading, inhumane, abusive, and unlawful. So they tried covering it up using their latest dirty trick: ‘Surprise attack’ medical care that they reasonably planned for AB to receive.”

Burstyn claimed the situation was “gamesmanship to create a pretextual termination.”

“All Antonio did was ask to be seen at a reasonable hour by a doctor with current medical records. When AB spoke up about his health this week, he was fired. On the field, then on Twitter.

“The Bucs have used AB’s past to get out of the jam they put themselves in last Sunday. It’s the kind of manipulation that made Antonio write ‘I do not understand how people publicly claiming to be concerned about my mental health can do these things to me in private.'”

Tampa Bay general manager Jason Licht told ESPN Thursday that Brown didn’t tell anyone on the Buccaneers’ staff about any ankle issues on the day of the game against the New York Jets or during it. Licht added the team made “reasonable accommodations” to bring the issue to an end but alleged Brown didn’t want to cooperate.

Licht said he believed the team was trying to “oblige him” and alleged the receiver and his agent didn’t send the team any medical information.

Brown was asked on the “Full Send Podcast” whether he could have handled the outburst better. 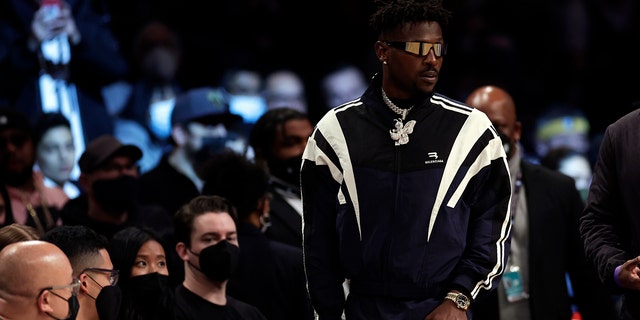 Former Tampa Bay Buccaneers wide receiver Antonio Brown arrives courtside during the second half of a game between the Memphis Grizzlies and the Brooklyn Nets, Monday, Jan. 3, 2022, in New York. (AP Photo/Adam Hunger)

“Bro, I’m Antonio Brown. Do you know what it’s like to be on the football field? Imagine you playing a game, football game … Imagine the guys you came to battle with while they know your fricking ankle is f—ed, you barely could run, and the guy you think got your back, this your team, this the guy you flew hear with … They knew about my situation before we even came,” Brown said.

“I communicated with the coach, the trainers. Everyone knows and to get there and be battling them and the guy tell you because you can’t go to war with them get the f– outta here. What do you want me to do? Sit there like … Bro, I’m an alpha man. You say f— me … I’m not gonna react bro because it don’t really matter what you say. You can’t affect me. But if you discriminate on my public image and my name, bro it’s like f–you too, professionally.

“They targeted hate on me. Why would you do a guy like that? You cut me in the press conference after the game. These guys know my injuries, my MRIs. They know what I got going on. But you know, maybe I make everything look too good. Everyone see what I does. They don’t see what … (the other side does) Exactly. They make me get to that point. You’d feel super disrespected if coach woulda told you ‘get the f— outta here.'”