Ohio State quarterback C.J. Stroud had six touchdown passes in the first half against Michigan State and the Buckeyes took an eye-popping 49-0 lead into the locker room at the end of the first half.,

Stroud’s first-half numbers Saturday were something professional quarterbacks hope to have at the end of a game – let alone in the first two quarters. 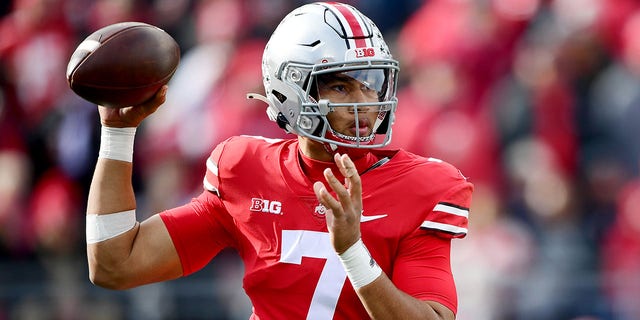 COLUMBUS, OHIO – NOVEMBER 20: C.J. Stroud #7 of the Ohio State Buckeyes throws a pass during the first half of a game against the Michigan State Spartans at Ohio Stadium on November 20, 2021 in Columbus, Ohio.
(Emilee Chinn/Getty Images)

The freshman from Rancho Cucamonga, Calif., was 29-for-31 with 393 passing yards and six TDs. Miyan Williams had a rushing touchdown. Ohio State dropped 21 points on the Spartans in the first quarter and 28 in the second. 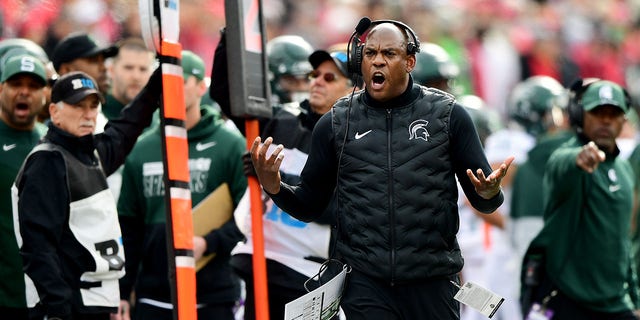 COLUMBUS, OHIO – NOVEMBER 20: Head coach of the Michigan State Spartans, Mel Tucker, reacts to a call by the officials during the first half of a game against the Ohio State Buckeyes at Ohio Stadium on November 20, 2021 in Columbus, Ohio.
(Emilee Chinn/Getty Images)

A win against No. 7 Michigan State would certainly bolster Ohio State’s College Football Playoff hopes. The Buckeyes were in fourth place in the latest ranking – just behind Oregon, who beat the Buckeyes earlier this season.

Another quality win would likely give the team an edge over undefeated Cincinnati when the season comes down to the wire. 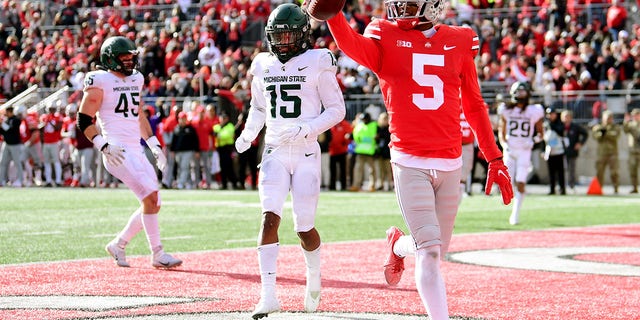 COLUMBUS, OHIO – NOVEMBER 20: Garrett Wilson #5 of the Ohio State Buckeyes celebrates his touchdown during the first half of a game against the Michigan State Spartans at Ohio Stadium on November 20, 2021 in Columbus, Ohio.
(Emilee Chinn/Getty Images)

Ohio State is one of eight teams in the top 10 of the College Football Playoff rankings who have one loss. There are three undefeated teams remaining: Georgia, Cincinnati and UTSA.