NBC News denied that a freelancer was attempting to contact jurors from the Kyle Rittenhouse trial, contradicting Judge Bruce Schroeder after he banned MSNBC from the courthouse Thursday over the alleged incident.,

NBC News denied that a freelancer was attempting to contact jurors from the Kyle Rittenhouse trial, contradicting Judge Bruce Schroeder after he banned MSNBC from the courthouse Thursday over the alleged incident.

While NBC News told Fox News Digital that the man was indeed a freelance MSNBC employee, it denied that he intended to photograph or contact jurors in the explosive case.

“Last night, a freelancer received a traffic citation. While the traffic violation took place near the jury van, the freelancer never contacted or intended to contact the jurors during deliberations, and never photographed or intended to photograph them. We regret the incident and will fully cooperate with the authorities on any investigation,” an NBC spokesperson told Fox News Digital.

The staffer associated with the liberal network, identified by the judge as James Morrison, was allegedly caught following the jury bus on Wednesday night and told police he was “instructed” to do so.

Schroeder sent shockwaves on Thursday when he announced the man was ticketed for running a red light while appearing to follow jurors, which resulted in the network being banned from the courthouse. 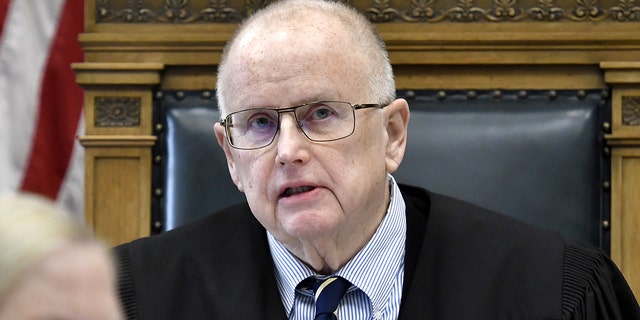 “The jury in this case is being transported from a different location in a bus with windows covered … Last evening a person who identified himself as James J. Morrison, and who claimed that he was a producer with NBC News, for MSNBC … police, when they stopped him, because he was following in the distance of about a block and went through a red light, pulled him over and inquired of him what was going on and he gave that information and stated that he had been instructed by Mrs. [MSNBC booking producer Irene] Byon to follow the jury bus.”

Schroeder said the matter is “under further investigation” but MSNBC won’t be allowed in his courtroom for the duration of the trial.

“He was ticketed for violating a traffic control signal, he’s not here today from what I’m told and I have instructed that no one from MSNBC News will be permitted in this building for the duration of this trial,” Schroeder said. “This is a very serious matter and I don’t know what the ultimate truth of it is but, absolutely, it would go without much thinking that someone who is following the jury bus, that is an extremely serious matter and will be referred to the proper authorities for further action.”

NBC News did not immediately respond when asked if Byon instructed the man to follow the jury.

Byon appeared to have deleted her LinkedIn account after Schroeder named her on live television.

Rittenhouse, an Illinois man on trial for intentional homicide and other charges in the shooting deaths of two people during chaotic August 2020 demonstrations in Kenosha, Wisconsin, was quickly labeled a “White supremacist” by liberal pundits at the height of protests sparked by the police shooting of Jacob Blake. Rittenhouse says he acted in self-defense and a jury is currently deliberating his fate.

The decision for the jury not to be sequestered has raised eyebrows, as pundits and legal experts feel jurors could be intimidated. A guest on MSNBC recently compared Rittenhouse to a “school shooter,” while another said he is “arguably a domestic terrorist.” MSNBC’s Joy Reid referred to Rittenhouse as a “vigilante” and compared him to Brett Kavanaugh because they’re both White men who cried while defending themselves.