Two people were caught on camera breaking car windows in the San Francisco Bay Area and stealing items from the vehicles in a brazen crime spree.,

A person was seen in video circulating on social media breaking car windows in the San Francisco Bay Area and stealing items from the vehicles as the city struggles with an increase in the brazen crimes.

The video shows an unidentified individual wearing a hoodie exit an Audi sedan, break windows on parked cars, and take what appears to be backpacks.

The city’s Central District struggled with a staggering 753% increase in car break-in from May 2020 to May 2021. The Central District includes tourist hotspots such as Fisherman’s Wharf and Chinatown.

San Francisco Democratic Mayor London Breed announced an up to $100,000 reward Tuesday for information to help identify, arrest and convict the perpetrators behind the crimes.

“The criminals are committing these acts in broad daylight in this city,” Breed said at a press conference. 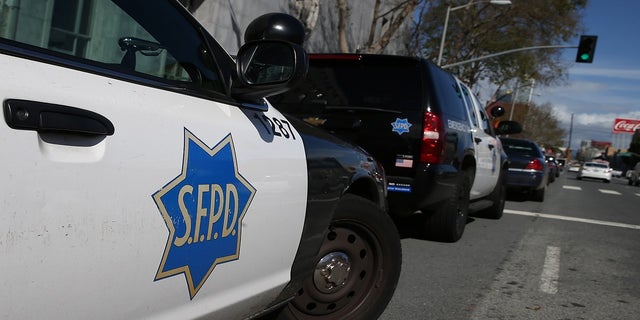 While the mayor was speaking, a couple visiting the city from Seattle fell victim to such a crime just a few blocks away.

SAN FRANCISCO CAR BREAK-INS UP OVER 750% IN SOME AREAS, POLICE SAY

“This happened just a few blocks from where mayor @LondonBreed announced a new plan to cut back on break-ins in #SanFrancisco. The couple is visiting from Seattle,” local ABC reporter wrote in a tweet of the incident, accompanied by photos.

“We both had our backpacks, he had his work laptop in there,” Anna Przybylowicz told ABC7 of what was in the car during the crime.

A TikTok star and Australian singer-songwriter visiting the city also said this week that he was robbed at gunpoint, with the suspects taking equipment from his parked car.

“They all pulled guns on us. So it was me and two of my mates. And we were filming the whole documentary together, and it was very weird. It was very scary having a gun to my face. First time in my whole life that I’d had a gun to my face. I was peeing my pants, very aggressively. Not actually, but in my head I was,” Clinton Kane recounted to a local news outlet.