ESPN Undefeated columnist Bill Rhoden said that NASCAR racing is “one of the most institutionalized racist sports organizations” during his comments about Bubba Wallace winning the YellaWood 500 at the Talladega Superspeedway last week.

On Monday, Rhoden appeared on “MSNBC Reports” with anchor Craig Melvin to discuss Wallace’s win and how it is former NBA superstar Michael Jordan’s first win as team owner.

“It’s very rare,” Michael said about the win, noting Wallace is the first Black man do win since Wendell Scott. “But it also inspires me that you’re making a difference in a sport that no one really thought could even happen. I feel gratitude, but I feel energized too. Let’s keep this thing rolling. Let’s have other Bubba Wallaces winning.”

MICHAEL JORDAN ON BUBBA WALLACE’S HISTORICE NASCAR WIN: ‘I EVEN DROPPED A TEAR’

Melvin noted Jordan’s comments about when joining NASCAR, he was “diving into the teeth of racism.”

“When I dove to get involved in NASCAR, I knew that I was diving into the teeth of racism. Knew it. Been there. Experienced it. But I wasn’t afraid of it,” Jordan said.

Rhoden agreed with Jordan’s sentiment, going as far as to label NASCAR as “one of the most institutionalized racist sports organizations in America.”

“The great thing about everything he said is that Michael Jordan is announcing that he’s joining the war against racism. He’s doing it in a very public way. He’s using his resources. He’s using his visibility. And he’s doing it through the prism of NASCAR which is probably one of the most institutionalized racist sports organizations in America,” Rhoden said.

Rhoden continued to emphasize a theme of racism in America later in his appearance.

“I think you can’t be an African-American in this country and live through everything we’ve seen just in the last five years with the politics, this rise of racism, and this ongoing idea, Craig, that this country is designed to be the white folks’ playground. And that thinking still exists,” Rhoden said. 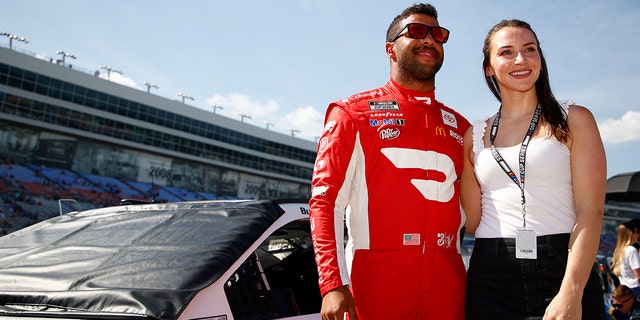 FORT WORTH, TEXAS – JUNE 13: Bubba Wallace, driver of the #23 Door Dash Toyota, poses for a photo on the grid with his girlfriend, Amanda Carter prior to the NASCAR All-Star Open at Texas Motor Speedway on June 13, 2021 in Fort Worth, Texas. (Photo by Jared C. Tilton/Getty Images)

Last year, Wallace faced criticism after claiming to have spotted a noose hanging in the garage he was assigned at Talladega Speedway in Alabama. Although an FBI investigation found that the rope was actually a garage pull, Wallace initially continued to claim it was a “straight-up noose.”

“I’ve been racing all of my life,” Wallace told CNN’s Don Lemon. “We’ve raced out of hundreds of garages that never had garage pulls like that. So people that want to call it a garage pull and put out all the videos and photos of knots being as their evidence, go ahead, but from the evidence that we have – and I have – it’s a straight-up noose.”

Wallace later admitted his mistake and “embarrassment” at the debacle.

“I think we’ll gladly take a little embarrassment over what the alternatives could have been,” Wallace said. “Make no mistake, though some will try, this should not detract from the show of unity we had on Monday, and the progress we’ve made as a sport to be a more welcoming environment for all.”