Chicago’s weekend crime saw at least 39 people wounded in shootings citywide, and, as carjacking incidents continue to surge, one woman was held at knifepoint with her two young children present.,

Chicago‘s weekend crime saw at least 39 people wounded in shootings citywide. And as carjacking incidents continue to surge, one woman was held at knifepoint with her two young children present.

From 5 p.m. Friday evening until 5 a.m. Monday, at least three people were killed and another 39 people were wounded in shootings citywide, Fox 32 Chicago reported. Among those shot were five teenagers.

Chicago police say a drive-by shooting at about 3:40 a.m. Sunday in West Town on the Northwest Side killed a 32-year-old man who was shot in the chest and wounded another four people. In Little Village at about 7:15 p.m. Saturday, two people got out of a vehicle and began firing shots, striking and killing a 45-year-old on the sidewalk whose name has not been released.

Another drive-by shooting at about 7:50 p.m. Saturday in the 3500 block of West 12th Place left three people wounded, including two 16-year-olds. Police say a dark vehicle pulled up and someone inside began spraying bullets at people on the sidewalk. Another two teenagers were wounded about two hours earlier in a shooting that happened in Chicago Lawn on the Southwest Side at about 5:50 p.m.

Police say someone in a dark SUV that pulled up in the 2500 block of West 70th Street opened fire. An 18-year-old shot in the chest was hospitalized in critical condition. A 17-year-old struck in an arm was also taken to a hospital and listed as in good condition, police said.

A drive-by shooting outside a funeral ceremony at about 5:40 p.m. Friday in West Englewood left three people wounded. A 16-year-old boy standing outside at about 1:40 a.m. Sunday in West Garfield Park on the West Side was grazed in the abdomen by a bullet.

Police say a 17-year-old walked into University of Chicago hospital at about 3 a.m. Sunday with gunshot wounds to his pelvic area and a leg – but the teen would not tell officers where the shooting had occurred.

Meanwhile, two carjacking and kidnapping suspects remain held without bond following an incident that happened just before 5 p.m. Friday in the parking lot of a shopping mall in the Chicago suburb of Villa Park. 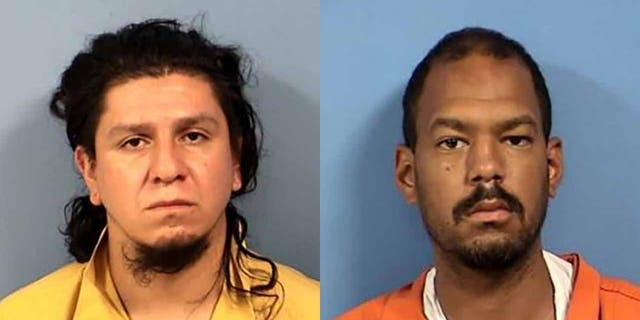 Luis Gomez-Garcia (left) and Christopher Krieg (right) allegedly held a woman at knifepoint while her two young children were inside her car.
(DuPage County Jail)

Luis Gomez-Garcia, 28, of Bensenville and Christopher Krieg, 32, of Carol Stream, are charged with aggravated vehicular hijacking, aggravated kidnapping and aggravated unlawful restraint. Their next court appearance is scheduled for Nov. 8.

Prosecutors say a woman exited the mall with her two children, ages 10 and 5, and got back into her vehicle, Fox 32 reported. Gomez-Garcia approached with a 3.5 blade and held the knife to the mother’s throat through her open driver’s side window.

Krieg then got into the back seat with the woman’s two children and the suspects ordered her to hand over her phone, Apple watch and wallet and drive to her house. She drove to a different location, and the suspects eventually let her and her two children out of the vehicle before driving off.

Police located the victim’s vehicle about two hours later in the 2900 block of W. Harrison in Chicago. Krieg was still inside the car, while Gomez-Garcia was just ten feet away. Both were taken into custody.

Chicago has seen some 1,400 carjacking victims in Chicago and elsewhere in Cook County so far this year, which include many people who’ve been shot in the face or elsewhere by offenders looking to oust them from their vehicles, the Chicago Sun Times reported. Through the end of September, there were 43.5% more carjacking incidents across Cook County compared to the same time last year.

Cook County Sheriff Tom Dart announced last week the creation of a new database allowing suburban police departments to share information about carjackings with the existing task force comprised of members of the sheriff’s office, Chicago Police Department, Illinois State Police and the FBI. He said the new database will make it easier to identify patterns and deploy officers to certain areas.