OBJ isn’t concerned about his connection with Baker Mayfield

The Baker Mayfield to Odell Beckham Jr. connection has been a work in progress since the three-time Pro Bowl receiver arrived in Cleveland in 2019. Injuries, miss-timed routes and questionable throws have led to Beckham Jr.’s decline in numbers with Mayfield at the helm, despite the Browns success in spite of it.,

The Baker Mayfield to Odell Beckham Jr. connection has been a work in progress since the three-time Pro Bowl receiver arrived in Cleveland in 2019. Injuries, miss-timed routes and questionable throws have led to Beckham Jr.’s decline in numbers with Mayfield at the helm, despite the Browns success in spite of it.

Beckham Jr. spoke to reporters after practice on Thursday and insisted that him and Mayfield are close off the field. 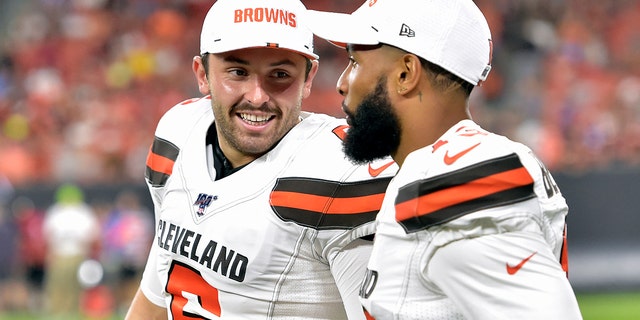 FILE – In this Aug. 8, 2019, file photo, Cleveland Browns’ Baker Mayfield, left, smiles as he talks with wide receiver Odell Beckham Jr. during the second half of an NFL preseason football game against the Washington Redskins in Cleveland. Beckham believes the Browns offense will come around. Until then, he’s going to defend Mayfield. (AP Photo/David Richard, File)

While it’s great to hear the off the field dynamic between the young, budding quarterback and the veteran receiver is great, the on the field results have been less than stellar. While Beckham Jr.’s only full season with Cleveland came in 2019, it saw him tally career lows across the board. Beckham Jr. played all 16 games, catching 74 passes for 1,035 yards and just four scores. More concerning, however, was that Beckham Jr. hauled in 55.6% of passes thrown his way. That number dipped to 53.5% in 2020 and is down to a career low 43.8% through two games this season. 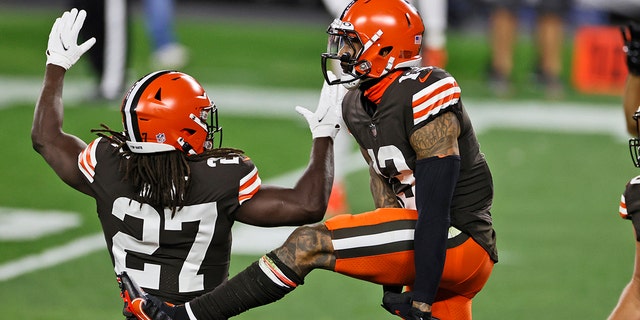 It pales in comparison to the success that Beckham Jr. had with former Giants quarterback Eli Manning. During his rookie year alone in 2014, Beckham Jr. reeled in 70% of his targets for 91 receptions for 1,305 yards in 12 games. The connection between the two in Big Blue led Beckham to become one of the best receivers in the NFL, a status he no longer holds today.

Mayfield has been far better when targeting fellow receiver Jarvis Landry, who’s made the Pro Bowl twice since coming to Cleveland in 2018. With Landry on the shelf with an MCL sprain, the Browns passing game rests on Mayfield and Beckham Jr.’s ability to establish a rapport as the season continues. It’s something that was not seen in the Browns 14-7 victory over the Vikings last Sunday, where Beckham Jr. was a non-factor, catching two passes for 27 yards. 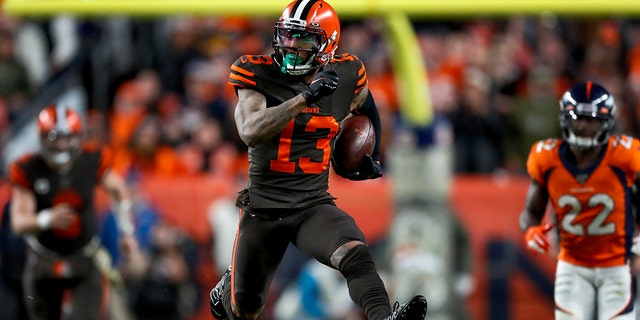 Cleveland Browns wide receiver Odell Beckham (13) runs after the catch against the Denver Broncos during the second half of NFL football game, Sunday, Nov. 3, 2019, in Denver. (AP Photo/David Zalubowski)

It doesn’t get much easier for the Browns (3-1), as they travel to Los Angeles to take on the Chargers (3-1) on Sunday at 4:05 p.m. on CBS. The Chargers defense has been stingy through four games, allowing just 192.5 passing yards a game, fifth best in the NFL.