Kim Kardashian and estranged husband Kanye West were seen leaving the Ritz Carlton together hours before the reality star is set to host “Saturday Night Live.”,

Kardashian, 40, will make her first appearance as host of “Saturday Night Live” later this evening.

She wore a puffy pink coat and matching pink gloves. Kardashian accessorized with silver sparkly heels and black sunglasses. The “Keeping Up with the Kardashians” star wore her hair in her customary slicked back up-do.

Meanwhile, West, 44, was dressed in all-black. 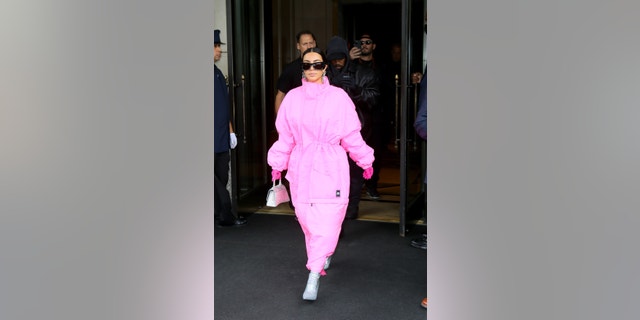 Kim Kardashian and Kanye West are seen leaving the Ritz Carlton together as they head to the ‘SNL’ studio in New York City.
(T.JACKSON / BACKGRID)

Kardashian’s family, Kris Jenner and Khloe Kardashian, have also been spotted in NYC ahead of the hosting debut for their sister.

Kardashian has reportedly been taking her hosting role “very seriously.”

“She feels a lot of pressure,” a source told People magazine. “She wants to wow the audience.”

“She’s both nervous and thrilled,” the source added. “It’s a huge deal for her.” 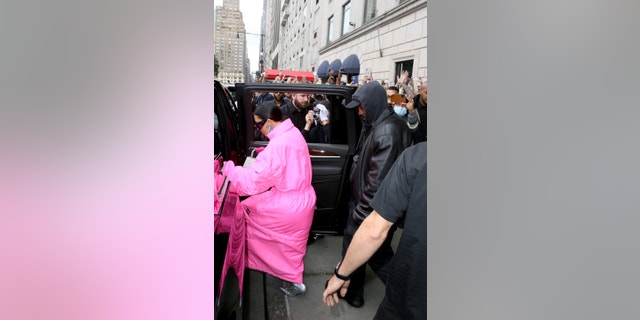 Kardashian has reportedly been taking advice from West, who has appeared on the comedy sketch show as a musician seven times.
(T.JACKSON / BACKGRID)

Despite the impending divorce, West has reportedly been giving Kardashian advice on her hosting job. The musician has appeared on “SNL” as a musical guest seven times.

Kardashian filed for divorce from the rapper in February after reports surfaced claiming the two had separated.

Kardashian addressed the divorce during a “Keeping up with the Kardashians” reunion in June.

“I honestly don’t think I would even say it here on TV but it was not one specific thing that happened on either part. I think it was just a general difference of opinions on a few things that led to this decision,” Kardashian told host Andy Cohen at the time.