Kyrie Irving’s vaccination status was the talk of NBA media day as the Brooklyn Nets opened camp and began preparing for a potential run to the Finals.,

Kyrie Irving‘s vaccination status was the talk of NBA media day as the Brooklyn Nets opened camp and began preparing for a potential run to the Finals.

Irving wasn’t attending the team’s media day in person due to New York City’s COVID-19 protocols, and he received plenty of questions about his vaccination status and whether he would be compliant before the start of the NBA season.

“Honestly, I’d like to keep that stuff private,” Irving told reporters, via SNY. “I’m a human being first. Obviously living in this public sphere it’s just a lot of questions about what’s going on in the world of Kyrie. And I think I just would love to just keep that private, handle it the right way with my team and go forward together with the plan. 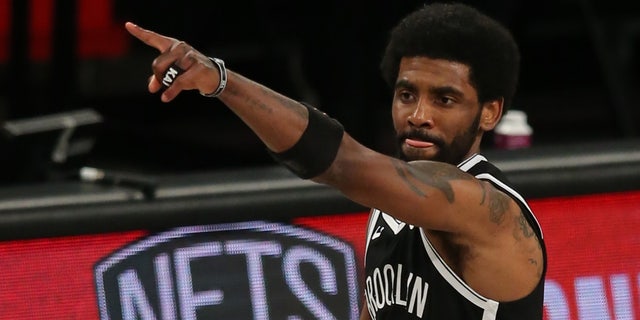 Brooklyn Nets point guard Kyrie Irving (11) reacts after a three point shot against the Milwaukee Bucks during the third quarter of game one of the Eastern Conference semifinals of the 2021 NBA Playoffs at Barclays Center.
(Brad Penner-USA TODAY Sports)

“Obviously I’m not able to be present there today. But that doesn’t mean that I’m putting any limits on the future of me being able to join the team. And I just want to keep it that way, so we can keep that private. But if anyone has any further questions about that, it’ll be the same response. I would like to keep that private, and just please respect that — my privacy.”

Irving talked to reporters via Zoom and Instagram Live. He was the subject of a wild Rolling Stone report claiming he was leading a syndicate of players who refused to be vaccinated against the coronavirus. He was accused in the report of being a “conspiracy theorist.”

Kevin Durant was asked about Irving and said the decision to get vaccinated was on the star point guard.

“I expect it not to be [an issue],” Durant said. “That’s on Kyrie. That’s his personal decision. What he does is not on us to speculate. I expect us to have our whole team at some point.”